The government is secretly subjecting citizens to large amounts of toxic fumes via a new form of high-tech chemical dumping.

This dumping is nationwide and affects millions. I'll explain it as well as the govt's futuristic tech used against targeted individuals (see CIA Spy Tech). I'll also give the most rational explanation for chemtrails that, like the dumping, no one is talking about (see FAQ under Details). For invisibility, jump to CIA Fourth Dimension Tech.

Afterwards, please go to "What's Happening" for the details as they happened.

Since 2002 I've had a condition called Multiple Chemical Sensitivity. I moved to Elizabeth City, North Carolina in July of 2008 and was doing okay until February 2009 when I noticed strong chemical fumes outside. The fumes covered the entire city but were strongest near the local Coast Guard base. No one else seemed to notice them, but because of my sensitivity I could smell them and feel their toxicity. It's the first time I've ever come across chemicals this toxic on such a large scale.

After 3 months, I complained to the local EPA. (Copy of orig complaint is in DETAILS: TIDBITS) I said that most of the chemicals were coming from the Coast Guard base and were so strong that I would double over from liver pain as I drove by it. Five days later, my house became a target for chemical spraying. A few weeks after that I saw a CIA recruitment ad on TV saying that they were hiring in the local area.

Cat's cancer diagnosis
The attacks started April 2009. They're on me 24 hours a day, tapping my phone and listening to everything that's said wherever I may be. If I say where I'm going, the chemicals are already there when I arrive. I frequently have to wear a chemical filtering mask. I even get attacked in stores and parking lots. And in September of 2013 my cat died of cancer just after turning six years old. She'd cry and howl when the fumes got really strong, and cats don't normally howl inside the home.

The strange thing about these chemicals is that once they stop spraying them they quickly disappear. So to keep me surrounded in fumes, they have to keep a steady stream on the house. If they stop spraying, the fumes inside can disappear in as quickly as 30 seconds. In fact, the chemicals are so volatile they won't even adhere to fabric. 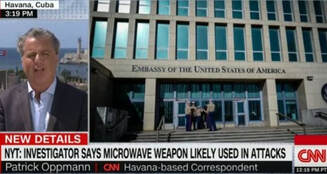 Sonic attacks through a wall would be way more difficult to implement than microwave attacks. So why would anyone use a slingshot when they already have a gun?
Microwaves weaken and spread out with distance. Therefore, the attacks need to be at close range for effectiveness and the ability to single out the target from other people in the room. I can tell that the attacks are very close and coming from the cavities in the wall, floor, and ceiling (or attic). I'd say the weapons are generally two to five feet away from me and will even follow me throughout my apartment. To get this close, I believe they're using futuristic, interdimensional tech that I only became aware of in September 2018 (see CIA Spy Tech). The diplomats reported auditory effects while attacked - chirping, humming and grinding sounds. My attacks are silent, which I believe is due to better equipment and the interdimensional tech. Stealth is very important to the U.S., but not as important to these foreign agents. So the sounds are probably just a byproduct of the attacks and not the attacks themselves. For instance, just because a gunshot makes a loud noise doesn't make it a sonic attack. The strange sounds the diplomats heard just meant that the weapons were nearby. The male diplomat in China said on 60 Minutes that he was being microwaved by his upstairs neighbors. But I can see why the government wants to call them sonic and not microwave attacks. It sounds less insidious and they don't want people to think their government can microwave them. And how many journalists posed the obvious question - "Can our own government do this to us and get away with it?" The answer is zero journalists. Clearly, their allegiance lies with the government and not the people. Instead, they confused and bombarded us with explanations such as sonic weapons, crickets, and mass hysteria. That's brainwashing, American-style. And calling them "health attacks" is just another attempt to down play the whole thing. The diplomats received physical injuries not diseases. Using the government's logic, getting clubbed in the head would be a health attack.  Mother of Attacked Diplomat Interview
​ 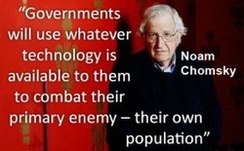 Whistleblowers against the US gov't are primarily US citizens. We're the ones that need to be watched and controlled
Don't trust the government. It's practically their job to grow stronger and take away our freedom. As soon as any technology to monitor and control us becomes possible, they can't wait to implement it. There's no voting. They just do it. And their only regret is that they didn't have the technology sooner. The U.S. government is the richest and most powerful government in the world. Now how can we be free when they have so much power?  It's impossible. Power equals influence and control. We are made to stay productive so they can get richer and stronger. Our duty is to work, pay taxes, and stay out of their way. We are their soldiers - economic soldiers whose purpose is to grow the GDP.

Like War and the US Prison System, the Targeting of Americans is a Growing Taxpayer Funded Industry
All I did to deserve this was make a phone call expressing concern for my health and the health of others. The only effect it had was that they suspended dumping for four days that surrounded a one day EPA inspection. My whistleblowing had no lasting effect on their operation. Now they're spending millions trying to hurt me (estimate 3mil/year). If you're thinking, "No one would ever go to this kind of trouble." Well, for them, it is no trouble. It's their job. They enjoy it and are well paid. Also, it's the desire of every governmental department to grow so it becomes larger, more important, and promotes its people. They need people to harass to keep their department growing and their people trained. This is a government program that supports the government elite. There are some programs that support the public (social security, etc.), but this is one for Them. It's a Kafkaesque nightmare where government work is done just for the sake of government work. Probably their only restriction is to leave important people alone because they'd have an easier time getting their story to the public.

The CIA does more harm than good and does not support the American people
I urge everyone to be careful. It doesn't take much to make them mad. I wouldn't be surprised if cutting off the wrong person in traffic would be enough to put you on their list. They have armies of agents, trained in destroying people's lives, that need to stay busy, and I'm sure the government never runs out of experiments that need human subjects. So don't give them a reason to make you their next pay raise.
Help eliminate military chemical waste - breathe deeply.
[What's Happening]       [FAQ & Chemtrails]       [CIA Spy Tech]       [CIA Goons]       [The Chemicals]       [Videos]       [Contact]